Name Days...and a bit of reflection 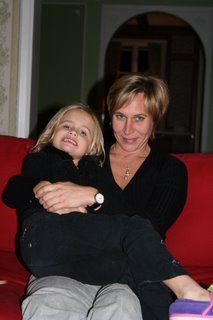 In Sweden everyone, at least the ones with Swedish names, have a name day. January 24th was Erika's. We celebrated by having some extremely wonderful rolls (as in, watch my ass expand before your eyes), and she got some small gifts. I don't think most parents go to the same extent here, but considering the kids don't get their own celebration for birthdays, it is a nice chance to single them out for attention. Karl's is coming up in a couple of days and Alex has her's in February. Then our cash flow steadies until August when they turn seven.

Sometimes I get a bit sentimental about the kids current innocence. Obviously at some point they are going to glimpse beyond the cosy little world they're in and realize that not everyone is nice, and some folks are just plain evil. While I recognize the inevitability of this I can't help wishing they could have the bliss they experience now, forever.

They will likely compensate for this by becoming teenagers and raising my blood pressure to entirely record levels. But presently, there are moments when you wish time could stop and the feeling they've both got and given you could last for an eternity. Whether it is playing "Go Fish" with them and seeing how excited they are when they get a "book", or just watching them slide around the yard on their sleds. When does that world fade? Why?

Anyhow, time to wrap up. Hope all of you are smiling wherever you are.
Posted by Test at 9:01 AM 1 comment: 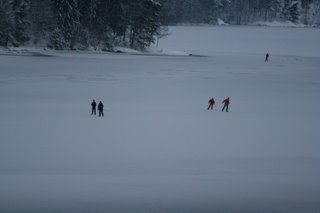 In the summer we have a steady parade of boats going by the waterway in front of our house. Now that the temp has dropped and the water has frozen the locals have taken to their skates and are sliding by in increasing numbers. It is tricky business though and they generally use a guide who skates in advance of them so nobody "vanishes" under the ice. Yikes!
Posted by Test at 2:24 PM 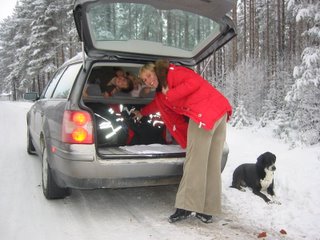 If you read the prior post, you know we had a great ski trip. Yesterday, the day of our return journey, was our 12th wedding anniversary. We knew that we'd be limited in our celebrating as we had a seven hour car journey to complete. But life is full of surprises. In this case we were given a special treat by our canine companion Patches.

About two hours into our journey Karl not so discreetly inquired if somebody had farted. It was confirmed through a survey of the car's passengers that noone had, in fact, "cut the cheese". However, a more detailed analysis determined that Patches, not one to settle for a mere gaseous emission, had elected to defecate in the aft compartment of the car. Thus the source of the odor had been identified.

Upon opening the rear hatch of the car, we were treated not to some conventional, orderly fecal arrangement, but to Patches' own artistic "Ode to Marriage" surrealistic smear. He was even thoughtful enough to include my ski jacket as part of his "canvas". Leaving me to ponder the depth of his message in frigid splendor.

In spite of a valiant cleaning effort, we were left to luxuriate in the odiferous confines of the car for another five hours. This added a dimension to long distance car travel that I hadn't really contemplated previously. If you're one of those intrepid souls who think seven hours traveling in a car jammed with luggage, three six-year old children and a dog over ice covered roads isn't quite challenging enough: then I highly recommend it.

The final solution, try to keep laughing (which somehow dampens your sense of smell), keep the windows slightly open (in spite of the 7 degree temp outside), and document the glorious occasion with a photo of the cleaning process.

In the photo you will notice a small part of Patches contribution to our marital bliss in the lower right hand corner. Also note the damningly guilty look on Patches face as well as the cheerful amusement of the kids.
Posted by Test at 10:42 AM 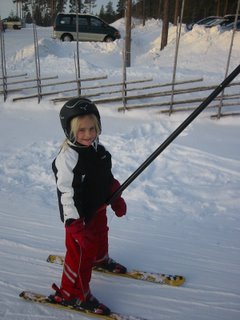 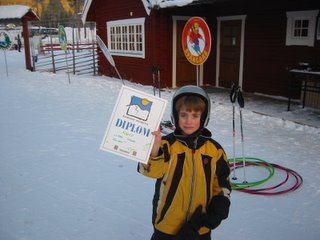 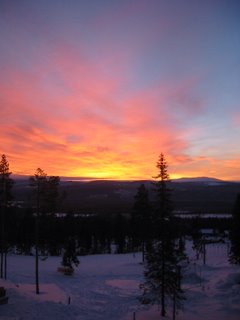 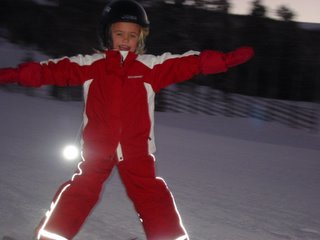 In spite of a great deal of trepidation, we took the kids skiing. The last time we went, about three years ago, was a total disaster. Karl got very sick and the girls refused to even put on their ski gear, let alone go to the slopes.

This time things went much differently as the photos can attest. The kids all made it successfully through three rounds of ski school and "graduated" from the bunny slope to the T-lift which took them halfway up the mountain. In the final analysis it was the best family vacation we've ever had, thus we are currently looking into returning for a week in February.
Posted by Test at 10:18 AM