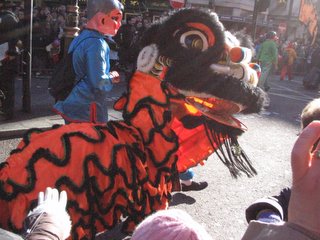 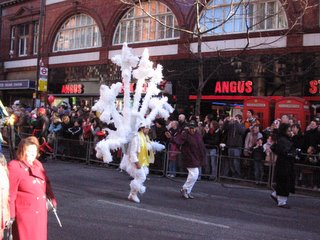 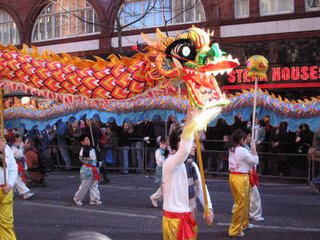 Was in London on January 29th, and went out in the morning for a bit of breakfast and a walk. Much to my surprise I walked right up on the Chinese New Year's parade. It was, frankly, not the most organized parade I've ever seen (that honor probably goes to Macy's) but it was good fun nonetheless. Perhaps in the spirit of inclusion they also had a few folks in Caribbean Carnival attire (see the person in the white costume above).

Why London? Well after staring at snow-covered ground in Stockholm for four weeks straight, I thought it was time to go "snow free". Yep, that's right, cold turkey. Oddly, I experienced no withdrawal symptoms. Even stranger, London had sunny blue skies the entire weekend. People give you a look of disbelief when, in response to their query about your tan face, you reply "Got it over the weekend in London."

Not much else to report from our northern post. Stay tuned.
Posted by Test at 12:54 AM