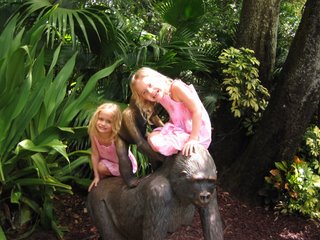 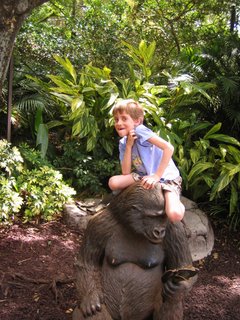 On April 3rd, my 45th birthday, the kids and I flew to the US to join Sofia, who had already arrived. As with any vacation, hopes ran high. We began our trip with a misunderstanding.

I thought Sofia knew when we were arriving, well she did too actually. Guess you know what is coming. We arrived, and Sofia was not to be found. At one point I figured she had taken her newly minted Master's degree (USF - Poli Sci) out for a drink, or several. Given the exhaustion of myself and more importantly the kids, we adjorned to an old neighbors house, so we would at least have more comfortable surroundings.

Finally, after a few scotches (me) and calls to the area hospitals and the morgue, Sofia arrived. We wasted no time in departing for our waterfront condo, which we would call home for the next ten days. Sleep came quickly for one and all, and we were all glad to be out of the Swedish snow.

The next morning we had a quick breakfast, departed for the pool for a couple of hours, and then returned to our old neighborhood for a bbq and party. The time and libations passed quickly. When our daughter Alex informed Sofia and I that we needed to go at 10pm we figured we better head out. Once again, we returned to our cozy condo and tucked in for the evening, with no harbinger of the day which awaited us.

The following day began much the same. Pool activities, a big breakfast, the usual vacation fare. Later in the day at around 2pm, Alex complained of an upset stomach and shortly thereafter drifted off to sleep on the sofa. I was nearly asleep myself, when Alex violently awoke by vomiting across the sofa and floor. A first we put this down to a little too much over clorinated water being swallowed at the pool. But it quickly became apparent that there was more to it than that.

She had gotten the rota-virus, which I suppose most parents have encountered. But given the symptoms, which include the body pretty much rejecting anything new coming in and giving short shrift to anything still inside, along with Alex being particularily wore out from the trip, by evening she was so dehydrated she could no longer stand. Off to the hospital she went with Sofia, where she remained for the next thirty-six hours on an IV.

It merits mention that this virus is highly contagious. Though we were lucky noone else got as severely ill, we had quite an interesting week after that. Its been quite a while since I was so happy to reach the end of something.

The trip had a superb ending though. On the final full day, everyone was back in fighting form. We thus proceeded to Busch Gardens for a whirlwind tour of the facilities, then to our old house (where the new owner had graciously invited us to use the pool) where the kids met up with friends from their kindegarten class for a little pool party. The evening was topped off with another bbq party with our former neighbors. In spite of our recent maladies, we carried on until nearly midnight, when the kids (OK - maybe it was me) had reached the end of their energy.

The best part is how the kids describe the trip. "We were a little sick, but we still had fun." Amazing how the brain is programmed to keep us focused on the fun in life. My memory of it is a little different, but on the whole, I'd say that description captures it.

Two notes. First, the photos are "after shots". Second, if you our ever fortunate enough to have great people as neighbors - treasure it. Many of our best friends live within the few blocks surrounding our old place in FL. It would be hard to find as nice a group of people within such a small geography anywhere. Here's to all of them.
Posted by Test at 9:42 AM